On 21 May I delivered a guest lecture in the Living in the Anthropocene postgraduate course at Macquarie University, Australia. The unit focuses upon how we should live in the Anthropocene and respond to the knowledge that current socioecological practices are not sustainable. The Anthropocene is defined here as a new geological epoch in which humanity is a driving force of global environmental change. 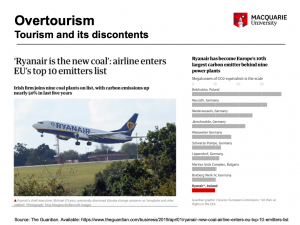 In the lecture – entitled “Tourism and the Anthropocene” – I argue that tourism is an important driver of anthropogenic climate change. Taking from Martin Gren and Edward Huijbens (2014): “in Anthropocene understanding, modern tourism is a geophysical force which has contributed to the reshaping of the Earth for human purposes and to climate change”.

The lecture highlighted some of the highest negative impacts of tourism such as water pollution, water and land use, waste, air emissions and Green house Gas emissions.  Paradoxically,  tourism is at once a contributor to climate change but also very vulnerable to the impacts of climate change, including direct and indirect impacts such as more extreme weather events, water shortages, biodiversity loss and damage to destinations, among others.

Some actors in the tourism industry have responded to the supposed “end of nature” that is upon us, by developing tourism products that capitalize on this very idea of extinction.

In the latter part of the lecture I meditated on some of the imagined future development trajectories of tourism, including ‘stay-at-home’ tourism and low- or non-carbon travel.